From the 4th to the 15th April in 2018 Select Physiotherapy and Pilates Senior Physiotherapist Daniel Browne worked at the XXI Commonwealth Games held on the Gold Coast. Below Daniel reflects on some of his experiences working with elite athletes. 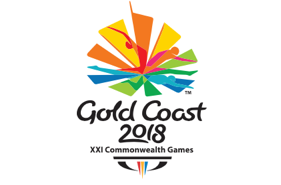 During Autumn of 2018 I was fortunate enough to be afforded a position at the 2018 Gold Coast Commonwealth Games as a Physiotherapist at Carra Sports and Leisure Centre. Within this role I formed part of the medical team which included fellow international physiotherapists, sports doctors and emergency medicine physicians, myotherapists and strength and conditioning coaches. Our role in essence was to provide care both before, during and after competition to optimise athletic performance. My direct role had me working both on the field of play and in the warm up area for wrestling, weight lifting, badminton, para weightlifting and athletics.

Having experience myself as an athlete at an international level, I had always felt I had a good understanding of what would be expected and appreciated from the medical team. What is unique about the Commonwealth Games however, is the level of competitiveness seen between athletes despite notably disparities in socioeconomic status. This became clearly evident in even the warm up area with large nations bringing an army of medical personnel to support their athletes, with others being seldom able to afford to bring a coach. It was these athletes, the ones who didn’t have access to elite sports performance facilities, 24 hour rehabilitation monitoring programs or 5 star hotels when travelling abroad, that I really enjoyed working with the most.

For many of these athletes, sport provides a means of focus and hope for a better life. One such instance of the games remains clear in my mind – I was treating a young athlete from Uganda. It was his first time overseas, and the first time he had spent more than a week away from his family. During the warm up he had rolled his ankle badly and was scheduled to compete the following afternoon. I had managed him acutely, spoken to the general access sports doctor and discussed a plan of management. We had decided to re assess the following morning and see where the athlete was at. The next morning he presented to me and immediately broke down into tears. He was from a small rural village, that had needed to fund raise for 2 years to assist with paying for a plane ticket and accommodation and now he may not even get his chance to compete. I am pleased to say this story had a happy ending all things considered, the athlete was successful through the first round and then lost the second – but in his own words ‘ I made my country proud’, and he did. Walking away from this I felt good knowing that I had assisted in some way to help this young man live out his dream, and make his community proud.

That night reflecting I felt a little disappointed that I hadn’t taken a photo or something to remember him by. The next day when I turned up for my shift one of the staff members approached me and handed me an envelope. The young man had left his countries pin for me in a way to say thanks. For those who don’t know. There is a currency at the commonwealth and Olympic games of ‘pins’. Each athlete gets a set amount that they then trade and barter with other athletes the idea being you try and collect a set. I received a couple during my time on the Gold Coast, but this one was particularly special. 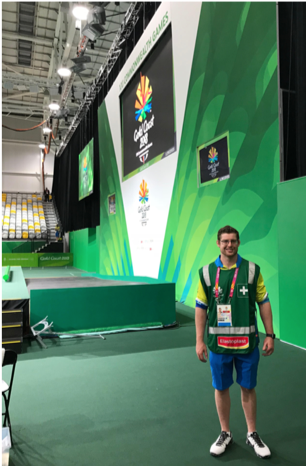 Staff and clientele of  Aspendale Gardens Medical Centre are required to wear a face mask.